Cruel and Unusual Comedy from the Desmet Collection of the Eye Institute, Amsterdam

Sunday, October 30 at 2:30pm:
Cruel and Unusual Comedy from the Desmet Collection of the EYE Institute, Amsterdam

With live musical accompaniment by Donald Sosin and his NYC Eclectic Electric Band.

Approx 110 min., plus a 15-minute intermission.
"Cruel and Unusual Comedy: Social Commentary in the American Slapstick Film" in a film series conceived and curated by Ron Magliozzi, Ben Model and Steve Massa and has been presented at MoMA in 2009 and 2010.

The basic concept behind "Cruel and Unusual Comedy" is to present silent slapstick shorts by featuring certain aspects of society and the human condition expressed through physical comedy, rather than showcasing a particular well-known comedian.  Hundreds of "orphan" comedy shorts made by the dozens of forgotten clowns of the silent screen, are held in the film archive at MoMA – and in archives worldwide – and are still entertaining and deserving of exhibition to audiences today.

Today's program, showcasing rare early comedy shorts from the Desmet Collection of the EYE Institute (Amsterdam), is the third annual installment of the series, and is a sort of "highlights reel" of a complete 5-progam series that will be presented at MoMA during 2012.  These rare European comedy shorts are predecessors and influences of the work of Mack Sennett's Keystone comedies (Keystone celebrates its 100th birthday in 2012) and are in some cases more outrageous and surreal than their American counterparts.  The EYE Institute has a huge collection of these films by the "Euro-clowns", and we are thrilled and honored to have this partnership to present these rare and hilarious films to a U.S. audience.

When the train men go on strike, Zigoto terrorizes the town in a hijacked locomotive.

As Zigoto, comic Lucien Bataille is one of more quietly eccentric denizens of the outrageous European film comedy universe. In some ways his body language and comedic attitude foreshadows Jacques Tati as Zigoto ambles to a decidedly different drummer. Bataille left Gaumont in 1912 and headlined in a new series for Éclair where he was re-dubbed Casimir. He later worked as a character actor in films such as Le Miracle des loup (Miracle of the Wolves 1924) and La Coquille et la clergyman (The Seashell and the Clergyman 1928).

Robinet disguises himself as a woman to get away from his girlfriend’s husband, and discovers the unexpected pleasures of public drag amidst mobs of flirtatious men.

Robinet is Marcel Fabre, an ex-circus clown who began appearing in French films in 1900, and was hired by the Ambrosio Company of Turin in 1910 to star in this series. Born in Spain as Manuel Fernandez Perez, he worked under various versions of that name and made five years worth of Robinet misadventures before heading to the United States in 1915. With Max Linder he was one the few direct links between European and American silent comedy, and continued his prolific output until an on the set accident brought his performing career to a close. Later he directed and wrote films until the late 1920s. 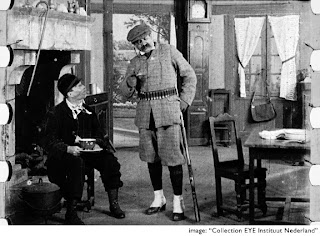 Anarchy and madness result when a plague of rabbits overrun the country home of an unrepentant hunter, in this “day of the lepus” farce.

Jean Durand, along with Romeo Bosetti, was one of the top and most prolific comedy creators of European silent comedy. In addition to the popular Onesime and Zigoto series, starting in 1907 he directed all kinds of comedies with performers on the order of Maurice Chevalier, Gaston Modot, and Clement Mege, not to mention numerous early western shorts. His later work included series with Marcel Levesque as Serpentin, and Berthe Dagmar as Marie, before he finished his twenty-two year career with the 1929 feature The Ideal Woman. 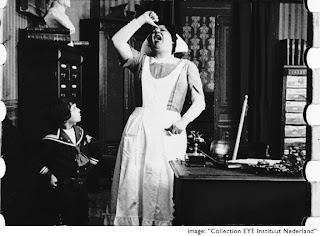 A mischievous child feeds his father a laxative leading to disruptive bouts of intestinal disorder and an unexpected reward.

Beginning in 1910, this series showcased Louis Feuillade’s five year-old discovery Clement Mary, with the precocious imp tormenting his bourgeois parents in seventy-four entries made through 1913. Problems with the boy’s real-life show business parents led to his being replaced by the younger Bout de Zan. Later re-appearing as an adult under the name Rene Dary, he was busy until his death in 1974. 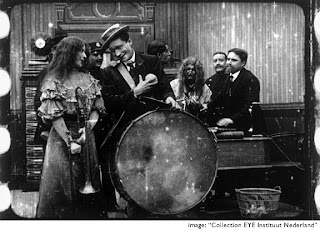 Working apart, a pair of off-key male and female street performers are assaulted by unappreciative music lovers, until an arrest brings them together, and they discover their power to make beautiful music.

This short is an example of the many creators of these comedies – directors, writers and performers – who are unknown and overlooked. Most came from music halls or circuses, and after a short jaunt in films returned there. Since movies weren’t particularly highly regarded many weren’t anxious to advertise that they were working in them and didn’t give them a second thought. Even some performers who had their own starring series, such as the actress who plays the stupid servant Cunegonde and the child who was the bratty Leontine, are a source of mystery today. 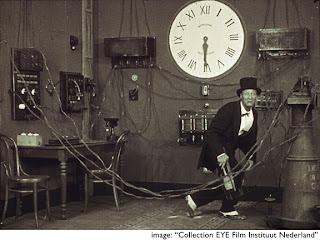 In an effort to secure a promised inheritance, Onesime invents a time machine that speeds up activity on earth, hyper-animates men and machines, and telescopes the human life-cycle.

This is probably the best known film of this group, thanks to its memorable time-tripping elements. Star Ernest Bourbon had created the Onesime character in the music halls, so it was already well-developed when he brought it to films. His outfit of the jacket, grey bowler, with white spats and gloves, gave an air of would-be sophistication to this inept bungler. The Onesime films were definitely a strong influence on the young Rene Clair, which can be plainly seen in his early films such as At 3:25 (a.k.a. The Crazy Ray) and The Imaginary Voyage (both 1925). 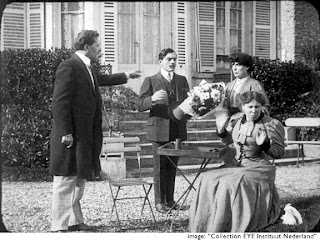 Suffering from unrequited love, Max hangs himself from a tree, and ends up hanging for hours while local townspeople squabble over whose responsibility it is to rescue him.

In addition to being the best known comic in this program, Max Linder was the first international comedy movie star. The most sophisticated screen comic before the arrival of Chaplin, Linder’s popularity led to two production forays to the United States, neither of which were successful or satisfying for the comedian. As in this short, despair and suicide were frequent motifs in Linder’s films, and are a chilling reminder that he took his own life in 1925.

A love doctor successfully produces men on order for needy women, until his system for delivering them – through the mail as puppets in canisters - goes awry.

Although French and Italian comedies dominated cinemas at the time, and today get the lion’s share of film scholarship, slapstick shorts were being made everywhere. Popular clowns in Germany included Rudi Bach as “Purzel” and stage clown Karl Valentine, while England had Fred Evans as “Pimple.” This German short doesn’t feature an established comic hero, but instead is part of the rich tradition of the “trick films.” The early “trick films” of masters such as George Melies and Segundo de Chomon were full of grotesque and gruesome imagery, but essentially comic, and the tradition continued and reached its apex in the late 1920s shorts of Charley Bowers.

Robinet escapes from his wife’s smothering devotion to the adventure of lovemaking outside marriage.

Showcased along with Marcel Fabre in this short is another of the Ambrosio Company’s popular stars – Gigetta Morano. From 1909 to 1920 Morano appeared in over one hundred and forty films for the studio, most of them done with her real-life partner Eleuterio Rodolfi. Gigetta was the first lady of Italian comedy films, and Rodolfi directed as well as co-starred. The strength of films such as Mam’selle Nitouche (1912) and Acqua Miracolosa (1914) enabled her to move beyond comedy. Her career ended in 1921, but she occasionally turned up in bit parts, most notably in Fellini’s I Vitelloni (1953). Born in 1887, she made it close to her centenary when she died in 1986. 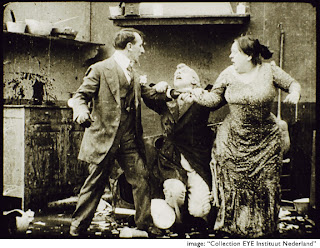 Wimpy Little Moritz needs to toughen up to win Rosalie, but ends up smashing everyone and everything in sight when boxing lessons turn him into a mindless fighting machine.

Romeo Bossetti was the renaissance man of the early Euro-comedies. Not only did he write and direct an amazing output of shorts for other people, but also had his own “Romeo” series for Pathe. He had come from the music hall and circus, as had his two stars for this series, Sarah Duhamel and Moritz Schwartz. The roly-poly Duhamel is a particularly overlooked comedienne who had been a child actress on stage from the age of three. Besides co-starring in this series she was frequently partnered with Casimir (Lucien Bataille), and starred in her own “Rosalie” comedies for Pathe, as well as “Petronille” for Éclair. Her career wound down in 1916, and her last appearance was in Les mysteres of Paris (1924).

When Onesime “doubles” himself on screen, the battle between his good and evil selves begins.

Our second selection from the popular Onesime series has our hero shadowed by his evil double in a comic Student of Prague scenario. It’s easy to see why this series was the favorite of the Surrealists with its dream-like imagery of malevolent twins, animals in fancy drawing rooms, and the wild acceleration of time. The Onesime’s were really a combination of personality comedy and trick films, as our comic bumbler always found himself in impossible situations that were made possible by sleight of hand with the camera. The series ran from 1912 to 1914. Star Ernest Bourbon appeared in films until 1918, and later had a school for acrobats in Belleville.

Director and writer Louis Feuillade is best remembered today for his surrealism-laced serials such as Fantomas (1913) and Les Vampires (1915), but turned out all types of films in the twenty years he worked for the Gaumont Studio. When he started in 1905 it was solely as a writer, but was soon directing as well, and by 1907 was named artistic director of the company. His serials benefitted from the antic spirit of his early comedy shorts, and he worked non-stop in all genres right up to his death in 1925.
Posted by Ben Model at 11:48 AM